On Tuesday we went to the Edgar center to do P.A.L training. This report outlines what experiences we had.

We were put in groups and there were three stations. One was about being a good leader and what it means. The other was about physical activity and how important it is and the last one was about how to let anyone play the game with no exceptions. Each activity went for around about forty-five minutes. There were 5 or 6 people from university who were taking it for heaps of schools.

One of the activities was how to manipulate a game and rules to help someone with a disability to play. We learnt how to help someone that couldn't talk, could not walk and had floppy arms to play T-ball. We learnt to find a lighter and bigger bat and strap it around their hand so they could hit the ball. We also learned about STEP. If you use STEP you can let anyone join in a game.

S stands for space (think about the area you playing the game in).

T stands for task (think is the task possible for the disabled person).

E stands for equipment (give an option of equipment for the game you are playing).

P stands for people (think of the people you are playing with).

We were given 3 different games that we had to change. We had to change T-ball tennis and volleyball so everyone can play no matter what.

We filled out a booklet and wrote in it why physical activity is good for you. Some people's answers were e.g. physical activity makes you strong and it makes your bones and muscles more healthy. We also did heaps of push ups, star jumps, burpees and sit ups. At the end of the push ups and exercises, everyone looked so tired. We did a game for a short amount of time. The person who was taking the section gave us about 5 pieces of equipment and we had to make up a game in five minutes with the equipment. It was really hard to present to the person who was taking it. Because we almost had to make it up on the spot.

The last activity was about how to be a good Role Model and a Leader. We learnt stuff like what makes a good leader and a bad leader. For example a bad leader can be cocky, bossy, mumbles and not confident. We also played a game where there were two mimes, a communicator and a blindfolded person. The two mimes had to mime out to the communicator what was on a card and on the card was things to do with equipment. The communicator told the blind person what equipment to pick up and what to do with it. If the blind person did it then you succeeded. A good leader cooperates, is responsible, is reliable, does fair play and is a good team player. We were also told to be BOLD which is an acronym for Big loud voice, Overall enthusiasm, Look towards audience and Demonstrate.

So over all it was really fun we learned heaps of new things e.g. help people play games no matter what, and do heaps of physical activity. The day at the Edgar center was one of the best days ever.

By Oliver, Johnny and William 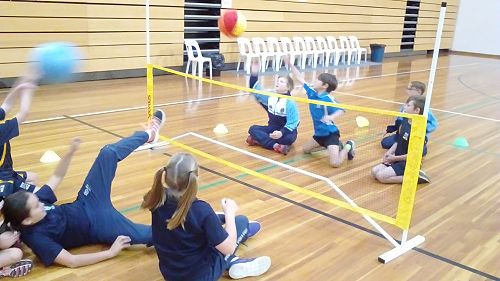